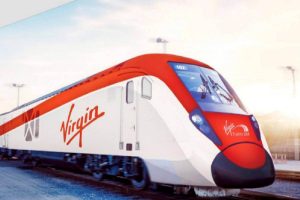 A California finance committee Tuesday unanimously approved the allocation of $600 million in tax-exempt bonds to go toward the Virgin Trains USA high-speed rail project between Las Vegas and Southern California.

The California Debt Limit Allocation Committee approved the bonds to go toward what’s formally known as XpressWest, the $4.8 billion rail project that would run from Victorville, California, to Las Vegas.

Internal Revenue Service guidelines allow Virgin to market up to four times the amount of the $600 million in bonding authority, for a total of $2.4 billion in tax-free, private equity bonds.

“It’s not only a train but an important economic development tool for your (Victorville) region, creating 20,000 construction jobs, as well as thousands of housing units and a clean, green electric mass transit system,” state treasurer Fiona Ma said. “It’s like a triple win.”

This is the second bond approval Virgin Trains has secured in the past few months. In March, the U.S. Department of Transportation approved $1 billion in tax-free private bonds for the project.

“Today’s approval is a great example of the public and private sector working together to create statewide solutions for the economy, transportation and housing, and it couldn’t come at a more critical time,” said Ben Porritt, Virgin spokesman. “The XpressWest high-speed rail project will result in thousands of new construction jobs in the Victory Valley region and will help meet California’s environmental initiatives.”

Both bond approvals are reliant upon all Virgin bonds being issued by Sept. 30. If they are not, California will put the $600 million it approved into the state’s new construction pool for affordable housing.

In January, the California committee curbed a previous vote on the bond approval to await a “record of decision” from the Federal Railroad Administration (FRA) regarding an environmental impact statement. That decision now isn’t expected until later this year, but committee members were comfortable moving ahead with the approval since several key federal transportation agencies were involved in the USDOT’s bond approval.

The final step to get the long-talked-about train project moving is for Nevada to approve $200 million in bonds from the state’s debt limit allocation, which would allow Virgin to market $800 million in bonds toward the project. If approved, construction is on track to break ground later this year.

Terry Reynolds, director of Nevada’s Department of Business, said it is still waiting for various agreements to be finalized before any decision is made.

“We still need the Nevada Department of Transportation agreement finalized, final environmental determination, evidence that the FRA will issue the record of decision, and (financial adviser) David Robertson’s due diligence on the financial side before we can issue a finding of fact,” Reynolds said.

There is no meeting set to discuss the bond approval in Nevada, and one won’t be set until all outstanding items are completed.

“We hope in the future we can turn our attention back to this project,” Reynolds said.

Virgin is projected to spend $3.25 billion on the project in California, including $2.03 billion on infrastructure work for the project, $650 million on railway vehicles and $175 million on the California station, set to be constructed on 80 of 225 acres the company plans to purchase near Interstate 15 in north Victorville.

The high-speed, intercity rail service between the Victor Valley area and Las Vegas would include up to 32 trains daily that will travel the 180-mile corridor in approximately 90 minutes, according to the application submitted to California. Each train set will have the capacity to accommodate up to 600 passengers.

Financial information was not provided for the Southern Nevada portion of the project, but plans are to construct a two-story train station on 14 of 110 acres owned by Virgin, located off Las Vegas Boulevard between El Dorado Lane and Robindale Road. The Las Vegas station would feature a seven-story tall parking garage, outdoor drinking and dining possibilities, a self-ticketing area, a departure lobby, retail space, baggage claim and office space.

Both Virgin stations will also offer business centers with print and copy services.

Virgin expects to offer multiple classes of service with travelers able to reserve specific seats and at times that fit their travel needs. Free high-speed Wi-Fi will be offered on the trains, with on-board food and beverage services available among other amenities.

Virgin plans to secure partnerships with major Las Vegas resorts and convention centers, and could offer customers the ability to check in to their Las Vegas hotel, and pre-register for a specific convention, ahead of their trip at the Victorville station.

Passengers will be able to complete their travel car-free to their destination as the train stations will be located near major destinations, offering connections to other modes of travel such as public ground transportation and ride sharing services.

The potential growth for housing and retail/commercial development around the stations, similar to what Virgin has in Florida, is also a possibility.